In honor of Indigenous People’s Day, 2021

Non-Natives can learn many things from Native Peoples. “Navarre’s” poem is a powerful example of this:

I live behind the totem pole in a park
It’s like a black hole
You can’t ever leave it. There’s no way out
Stuck there till the end
I’ve watched people get hurt, die, never leave
I hear stories about people
who spend their lives there

I keep watch after everyone that lives there
all the natives
making sure no one defaces the totem pole
Now that I’m not there, everything gets bad
When I’m not there, somebody gets hurt

Everywhere I go, there’s life and death
There’s always a shadow on me
stopping me from seeing the light
Hopefully, the shadow will arise
so I can see the light

Dedicated to my family

While “Navarre”‘s poem offers many lessons, one theme a reader can take away is the importance of story-telling. Despite the struggles of Navarre and the people living around the Totem Pole, narratives hearten the poet and the reader (stanza 3), along with the image of community–having each others’ backs “no matter what”. To contrast the importance of the collective, the poem also lifts up the importance of the individual (“Now that I’m not there, everything gets bad”).

And so on this Indigenous People’s Day, we can reflect on those Native people who are no longer among us, along with the many who are still here with things to teach us so long as we are willing to listen. 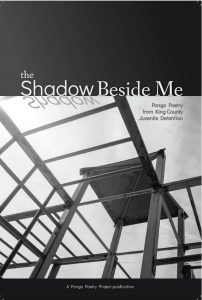 Pongo featured in the Council of Juvenile Justice Administrators Newsletter

Get Certified in the Pongo Method!